A price boost is when a bookmaker offers higher odds on a sport than normal as a promotion to their customers. The back price they are offering can be higher than the lay price on the exchange meaning you can profit from these price boosts risk free!

The amount from price boosts are generally small and around £2-£3 on average, however if you were to do them every day you could easily make £100 or even £150+ a week from just the boosts alone!

An example may be something like Ladbrokes boosting Arsenal to win at odds of 5.0 instead of 4.0. Whenever a bookmaker does such boost, there is always a maximum stake - lets say here it's £20. In this example, the lay odds on the exchange are likely to be around 4.5 which creates us a chance to profit risk free!

You can calculate how much profit you're going to make by simply entering the numbers into the Normal calculator: 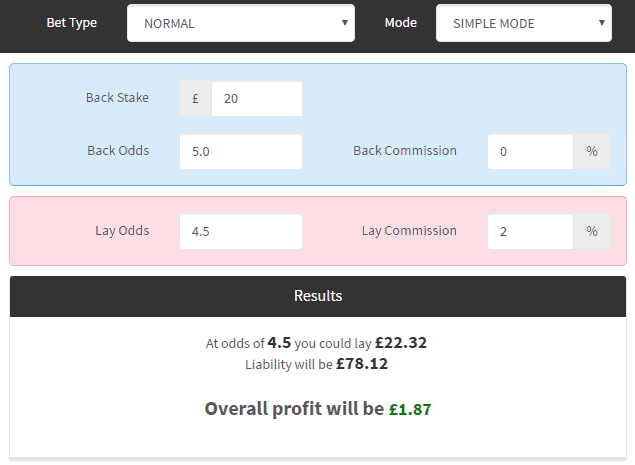 The profit is worked out just like the loss is on a normal trigger bet. You can see that the lay stake you should place is £22.32 (with a £78.12 liability).

Are All Price Boosts Profitable?

There are two occasions when we cannot make a profit risk free from price boosts:

Sometimes bookmakers advertise price boosts that aren't actually boosts. The original odds they are offering might be so bad that the "boost" is just bringing the price up to the normal value.

Using the example from above, if Ladbrokes had boosted the odds from 4.0 to 4.5, and the lay odds were also 4.5, you wouldn't be able to make a profit and would infact make a loss after paying the commission on the exchange.

Not all price boosts have an available lay market on the exchange, and because of this we cannot profit as we can't lay the bet! An example of this is "Ronaldo to score and Messi to score". On Betfair and Smarkets there is a Goalscorer market, but you can only lay one player. The mentioned price boost is for two separate players to score, something which we cannot lay, and so cannot profit from.

If you come across a boost like the 2 previously mentioned, simply skip it and move on. There will be plenty of other profitable boosts that you can get stuck in to. Just remember, because it's called a "boost" doesn't always mean it is profitable.

How To Find Price Boosts

If you have a subscription to Oddsmonkey, you can subscribe to the price boost thread on their community page here.

Members post all the best price boosts in this thread, so you can be notified of the profitable price boosts every day instantly.

If you have a smart phone you can receive notifications for every price boost on your phone, meaning you will never miss a boost again. To do this you need to download an app called "pushbullet". A guide on how to set this up can be found here

In the below example you would have clicked into the Italy vs Uruguay game. Here you can see a Match Special which can be layed off on the exchange for a profit.

There are many bookies that have price boosts on popular games, but the main bookies you can focus on are:

It's also worth checking Twitter around 45 minutes before a match as boosts are sometimes advertised. For example, in the week when a game starts at 7:45pm, it's worth checking around 7pm/7:15pm as that's when most price boosts are added.

Facebook Group - ask over 25,000 fellow matched bettors (including the Team!) any questions you may have. [Join The Group] 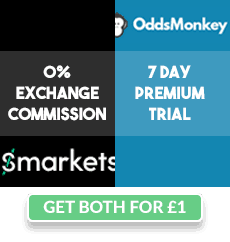