The next couple of weeks are going to be very quiet in the Matched Betting world. Pretty much every high profile event that we use daily when Matched Betting is going to be cancelled. Because of this, we've made a post covering some of the questions that you may have whilst also including some general advice.

So what is actually cancelled?

Football: April 3rd
Almost all major football. At the moment, only the German Bundesliga is still running (as far as "top" leagues go). English Football will be cancelled until at least April 3rd.

Rugby: Uncertain
Wales are playing Scotland on Saturday and as it stands, the game is going ahead. It appears that games after may well be cancelled, however we have to wait for updates.

Tennis: April 27th
ATP, the main men's tennis tour, is cancelled until the 27th April. There may be some smaller events on however high profile tennis will not return until this date.

Golf: Until Further Notice
The most recent golf tournament was actually cancelled during the event, and it isn't set to return for a while. There's no specific date set, but the upcoming events are all cancelled.

Horse Racing: Still Running
As it stands, Horse Racing is still okay. Over the next few days this may change, however it appears that they will still be running races (possibly behind closed doors) and so you're completely fine to bet on the races at the moment. I'd advise only placing bets on the day of the race though, just incase a race gets cancelled the night before.

What Happens To My Bets?

If you have bets on matches already then do not worry. Both the bookmaker AND exchange will void your bets, refunding all of your money to the respective account. Bookies and exchanges sometimes have different timeframes when they void i.e. Betfair might keep your bet valid for 36 hours and a bookmaker 72 hours. This is important when games are rescheduled, however, in this case, the games are cancelled for a very long time and so it won't affect you whatsoever.

What Does This Mean For Matched Betting?

Well, over the next few weeks it means it's going to be VERY quiet. There will be no Premier League on the weekends and no midweek Champions League/Europa League. It's essentially going to be just like the international break, but a little worse. The one little bit of hope we're holding out for is that horse racing stays. This will allow you to get any trigger bets on if you're doing sign ups, and there will of course be a few more horse focused offers. If the horse racing is suspended however, then Matched Betting itself will be pretty much shut down for the next few weeks.

What Should I/Shouldn't I Do?

DO - Withdraw Money
We strongly recommend you withdraw all balances from any bookies that are only offering no protection on funds. This is because there is an increased chance a bookmaker could go bust/close down, due to the lack of sport. You'd hope that most will be fine, however a month of taking almost no bets may harm some of the smaller players in the betting world and so you should do this as a precaution!

You can check up on which protection level a specific bookmaker has here:

and if you want to know about a bookmaker that isn't on this list then please just ask!

DO NOT - Place Accas

Ignore accumulators of any kind for the next month or so completely, unless you're extremely advanced and know exactly what to do if legs are void. If you do place an acca and games get rescheduled then there's every chance you'll lose both your back and lay bet. Unfortunately we can only help so much - there will be times where games are rescheduled and one bet is void but another isn't, and you'll pretty much lose everything. So, for accas, AVOID AVOID AVOID. You have been warned!

Can I Still Make Money Over The Next Month?

If Horse Racing is cancelled then it'll be pretty difficult to profit from Matched Betting over the next month or so. That being said, there will be a few leagues across the world that may not be suspended. Russian and Turkish leagues are still going ahead at the time of writing, so you could potentially use these for your trigger bets and maybe (just maybe!) the bookies might put some offers on these games.

There is one thing that won't be quiet across this period, and that is Casino offers. Most of you are probably aware of our premium casino offers service, Team Casino. If you're not, it's a great website that shows you exactly how to profit from Casino Offers. Each offer has a full guide to accompany it, and we offer plenty of support in the form of live chat, email, and an exclusive Facebook Group.

Now, Casino offers are usually extremely lucrative, but this month we're expecting them to be more so. With no sport on, you'd assume the bookmakers will put on some decent offers. At the time of writing, there's over £1,100 worth of welcome offers (for existing sports accounts) on Team Casino, and around £800 a month worth of EV thereafter. You can grab all of this for 7 days for just £1! We also offer a 30 day money back guarantee if you do upgrade to full membership, so you might as well give it a go and see if it's for you! 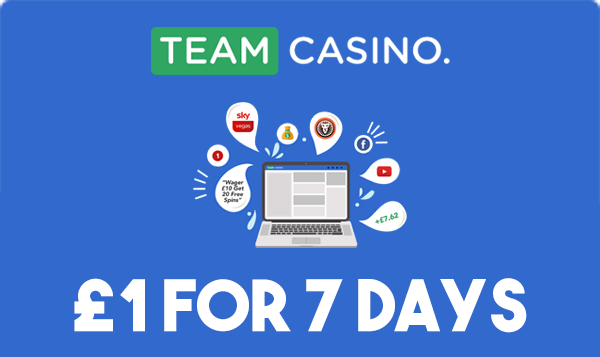 We hope sports resume soon... but until then, you can find us at the Winchester waiting for it all to blow over!

Facebook Group - ask over 30,000 fellow matched bettors (including the Team!) any questions you may have. [Join The Group]